It is the mission of Wheeler Avenue Baptist Church to be a worshiping, witnessing and welcoming congregation committed to a spirit of excellence in the praise of the Almighty God through Jesus Christ; the Christian Education of children, youth and adults for the maturation in the faith; and worldwide ministry for the promotion of peace and justice in every aspect of life. To this end, all people will be touched and transformed by the liberating power of God’s Holy Spirit. 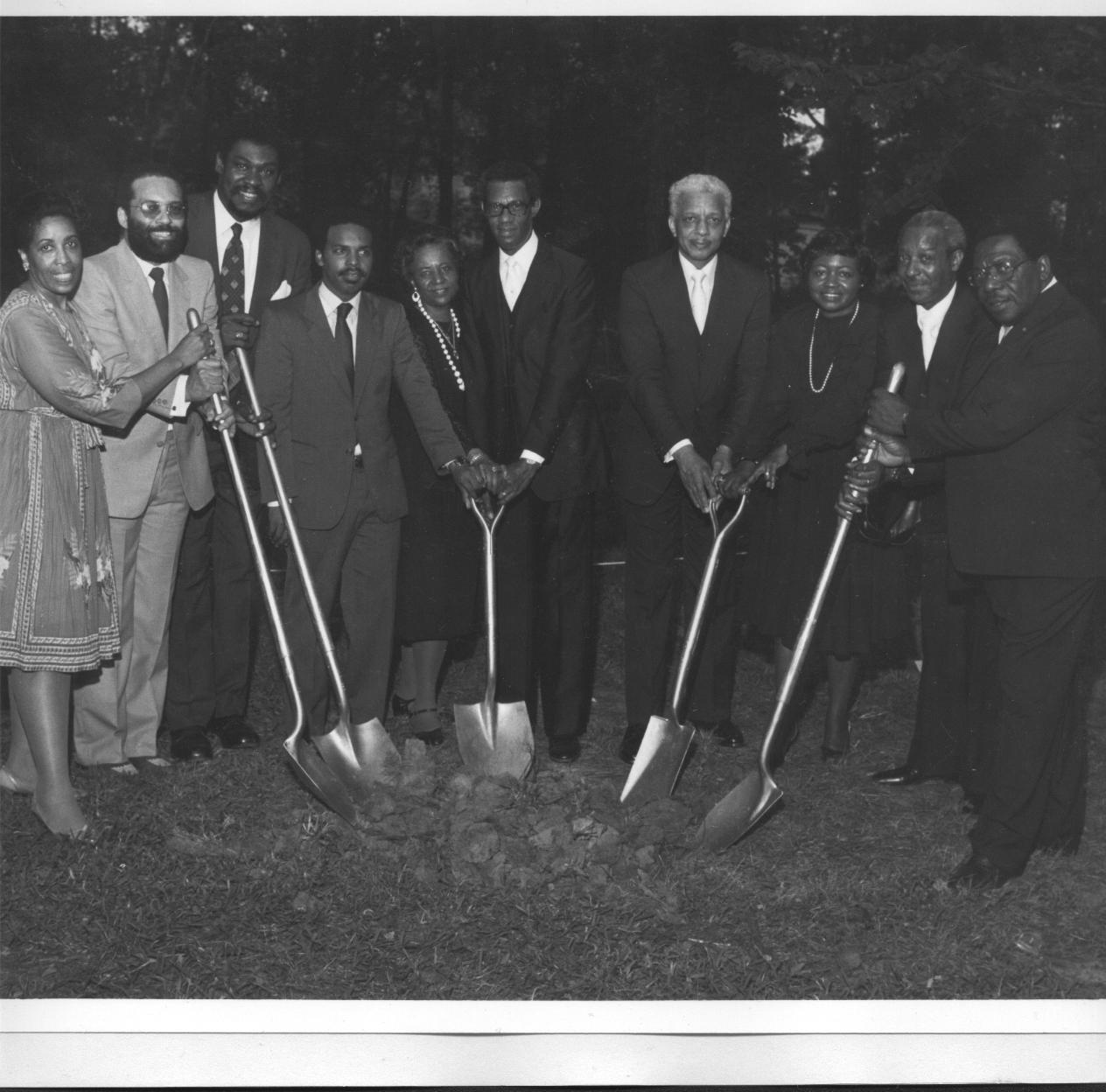 In March of 1962, 13 pioneering worshipers assembled in the lounge of Texas Southern University’s Baptist Student Union for the sole purpose of establishing an ecclesiastical form of expression through which the worship of God and service to mankind could co-exist. The congregation currently known as Wheeler Avenue Baptist Church became the avenue through which those assembled would express their faith and extend hope to others.

In His inimitable Grace, God supplied every need for the developing congregation. From the trustworthy courage of the original 13 to the undaunted hope of over 12,000, God has continued to faithfully increase the number of sheep in the flock.

The Southern Baptists graced the church with her first sanctuary, later known as “The Chapel,” in 1962. The growth of the Wheeler Avenue Complex over the years has, indeed, been a testament to the incomparable deeds of our God. He has favored His flock with a ministry complex consisting of a prayer chapel, a scout house, a sanctuary for worship, a shipping and receiving facility, and the William A. Lawson Christian Life Center and Community Life Center, all of which were consecrated for the work of ministry during the 41st church anniversary. 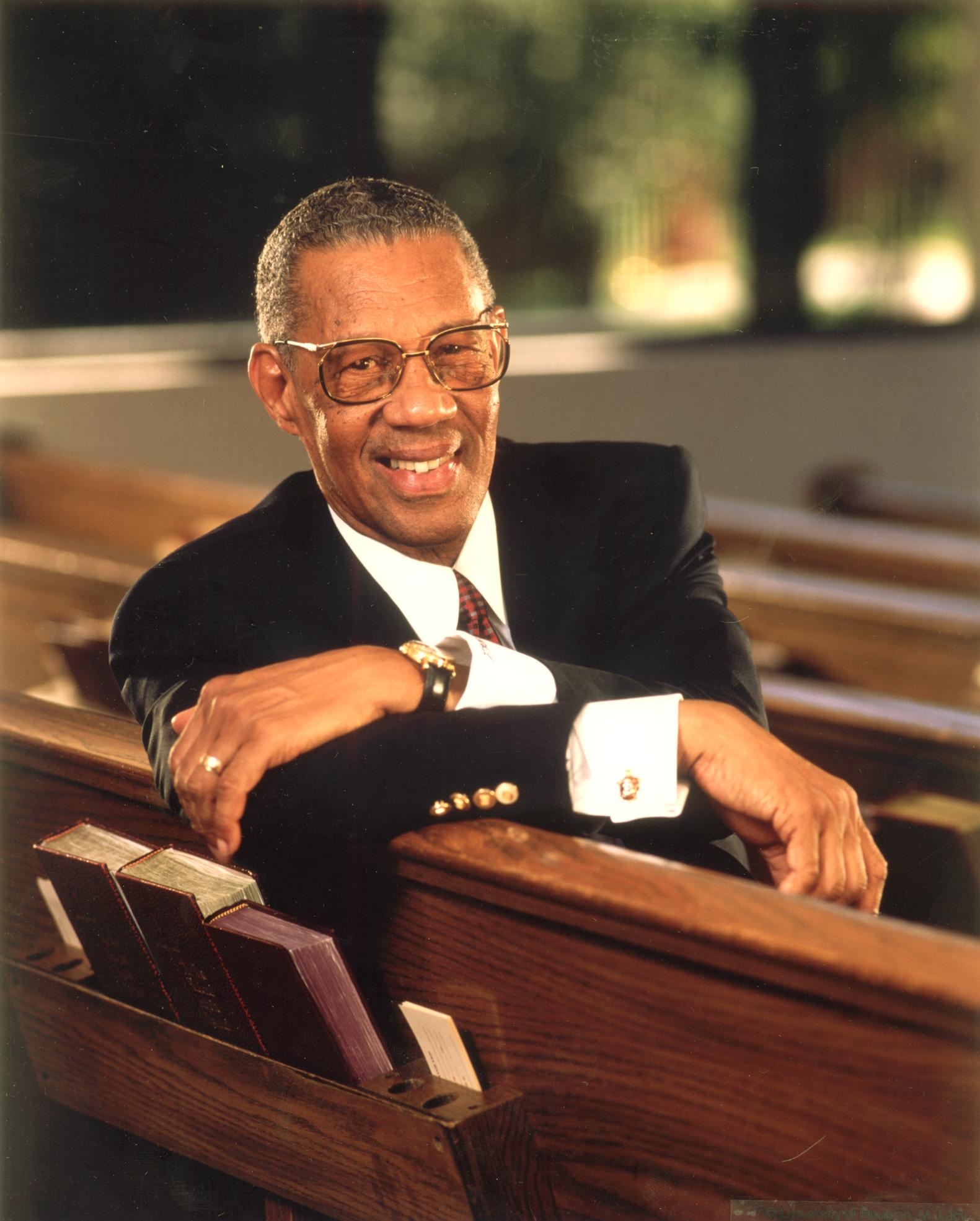 Representing the Trinitarian reality of the Father, the Son and the Holy Spirit, Pastor William A. Lawson led the congregation to conceptualize ministry outreach to the “triangle” that borders the geographical locale of the church in the Third Ward of Houston, Texas. As God’s Grace abounds, the original unrelenting commitment to shine the light of Jesus throughout the Third Ward is continuously evolving in the service of the Wheeler Avenue ministries. This expansive thrust for ministry began early in the history of the church through the initiation of the Mission and Mercy Program in 1963.

After 42 years of spiritual leadership in the congregation of Wheeler Avenue Baptist Church, Founding Pastor, the Reverend William A. Lawson, announced in the anniversary worship on June 6, 2004 that he was prepared to pass the staff to another Shepherd. 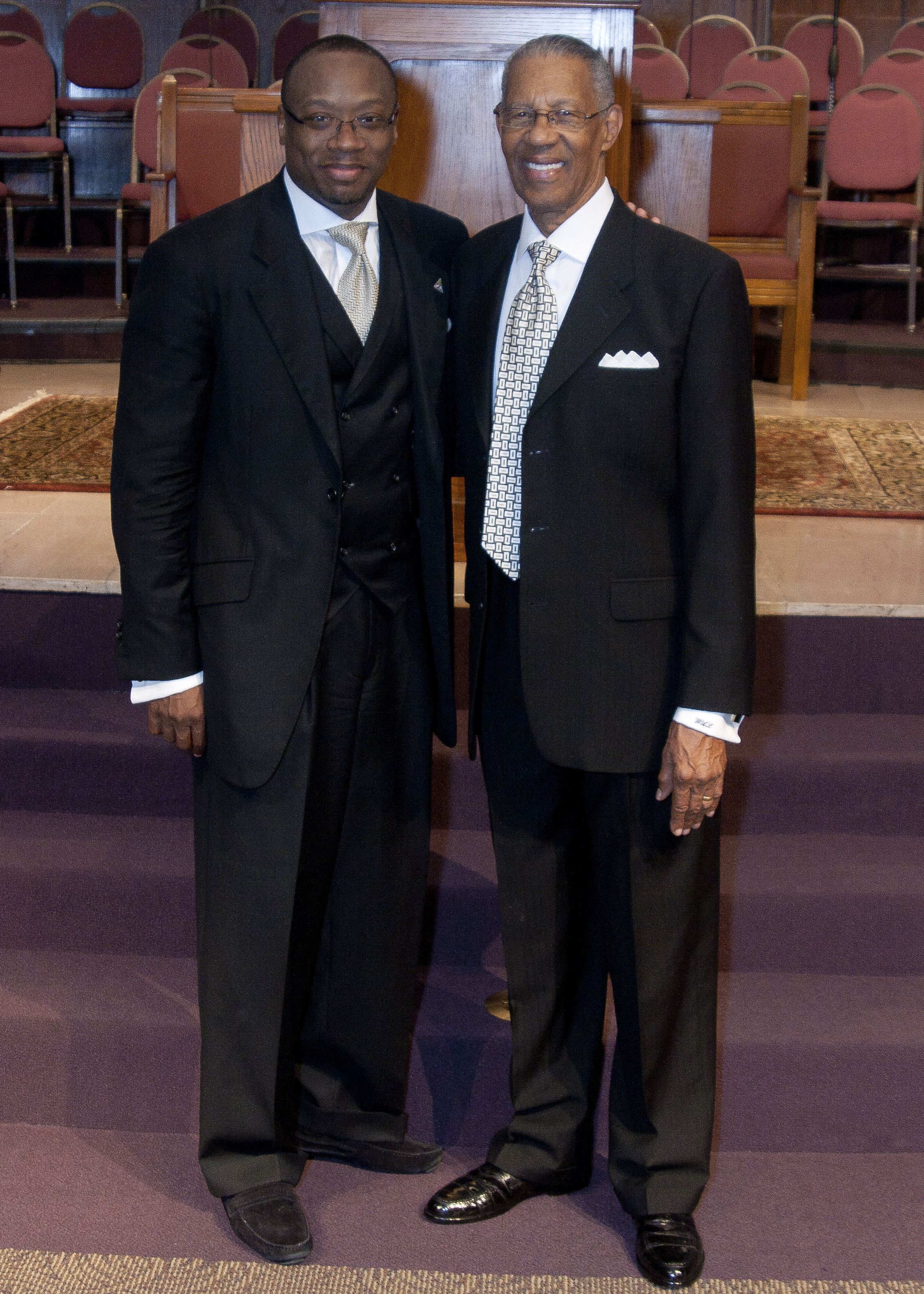 After forty-two years of spiritual leadership in the Congregation of Wheeler Avenue Baptist Church, Pastor Lawson announced his retirement in the anniversary worship on June 6, 2004.  As God had preordained in His will and through His benevolence, the Congregation elected the pulpit committee’s sole candidate, the Rev. Dr. Marcus D. Cosby, who had served as Associate Pastor for six years.  Over the past eleven years, it has become patently clear that God has commissioned Senior Pastor Cosby to develop the ministry and the people of Wheeler Avenue Baptist Church in this season of her existence.  Early in the tenure of Pastor’s Cosby Commission to the spiritual leadership of Wheeler Avenue, he instituted a grace-filled journey with an intimate familial character through establishment of a five-summer Family Plan Bible Study:  From the Cradle to the Crown, 2006-2010. This study was preceded by the Pastor’s Bible Study Series entitled, Back to the Basics Family Bible Study.  A primary focus of this commissioned servant is the uplifting and strengthening of the home flock for the work of the ministry.  With an intentional intergenerational focus, such ministry efforts as Faith –Filled Friday, in celebration of the steadfast trust in God demonstrated by congregants, the Seasoned Saints Salute, a vision of First Lady Audrey Cosby, which honors the faithfulness of a senior servant of the church, and Charter Day, which celebrates charter members and gives God glory for the founding of Wheeler Avenue Baptist Church. 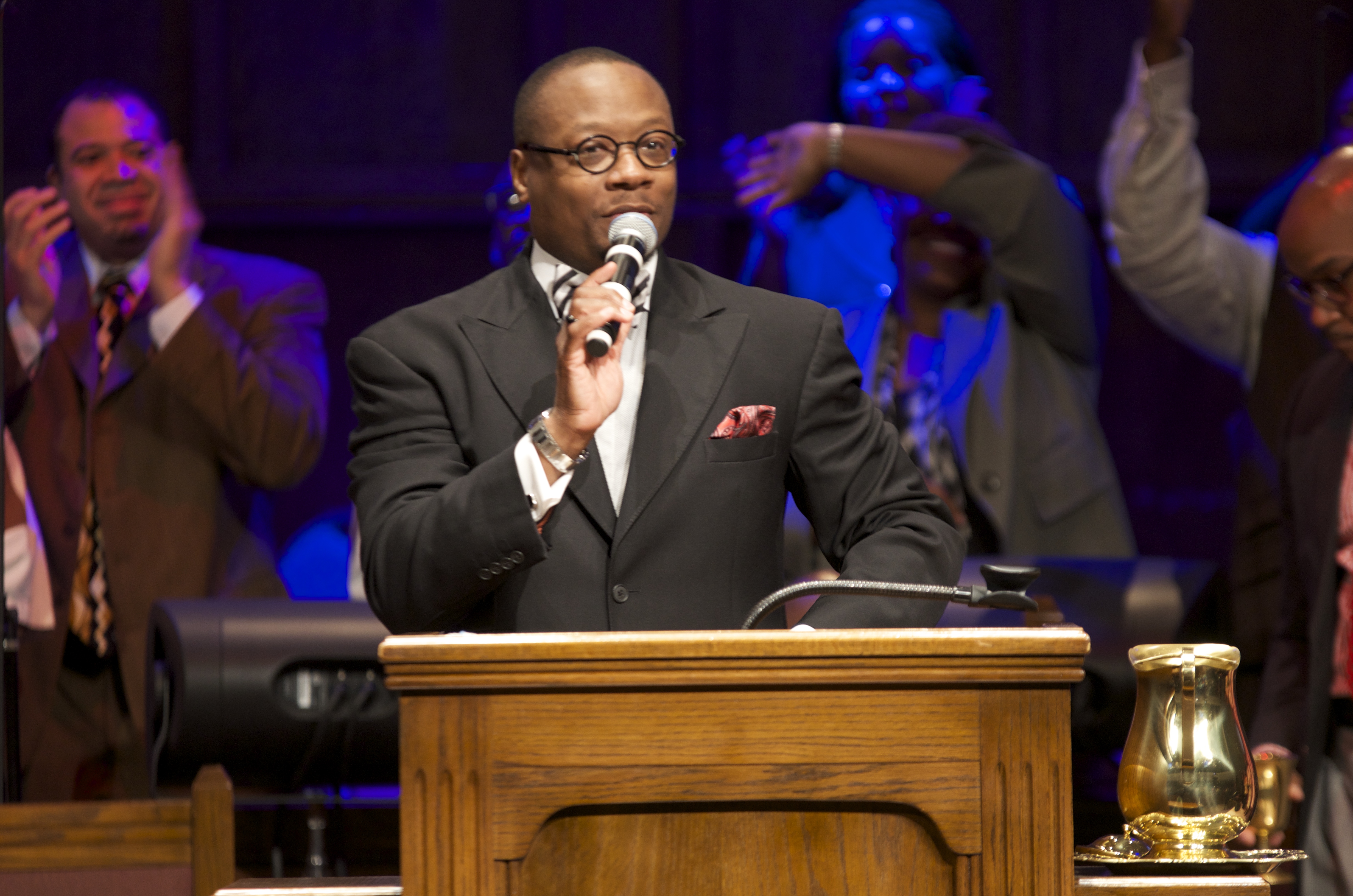 With unrelenting compassion for the least of these, Pastor Cosby is leading the Wheeler Congregation in a Homeless No More initiative, the foundation for which was established through the leadership of Pastor Lawson as he led homeless initiatives during his pastorate. Currently, homeless individuals are served food for the spiritual and natural body each Thanksgiving season; and, as a perpetual aspect of this thrust, the Madge Bush Transitional Living Center serves as a safe haven for homeless mothers and their children.

In the fall of 2008, Pastor Marcus D. Cosby, God’s commissioned servant for this season in the life of Wheeler Avenue Baptist Church, revealed the five-year vision plan which he received from God.  The plan includes four points: 1) Welcoming/Witnessing Church, which aims to inspire the Congregation to fulfill the Great Commission given by Jesus to His disciples; 2) Winning Children, which supports the preparation of the future generation of faith; 3)Worldwide Commitment, which seeks to develop within the congregation a more authentic concept of Jesus’ command for His people to be His witnesses to the uttermost part of the earth; and 4) Worship Center, which encourages the congregation to reflect on the meaning of  building a place for the Glory of God.  God has already blessed the efforts of the worldwide commitment vision point through the erection of a facility that serves youth and the elderly in the Village of Emmaus, South Africa, a place which Pastor Cosby and his team dedicated the Summer of 2011.

Two historic events occurred at Wheeler Avenue during 2006, the first of which was Wheeler Avenue serving as host for the Samuel DeWitt Proctor Conference, Inc. and the Katrina National Justice Commission.  Following this event, the final telecast of ABC’s Nightline Town Hall Meeting with Ted Koppel was held at Wheeler Avenue.

Senior Pastor Cosby has served with a staff of five to seven ministers as the church membership has grown to over 15,000 members. The ministries headed by staff are Counseling, Congregational Care and Development, Children, Christian Education, Christian Marriage and Counseling, Middle School, Youth, Young Adult, Singles and Seniors. Additionally, on our campus we have Chronicles Bookstore; a specialized resource center, for training materials, books, CDs, and DVDs pertaining to healing, prayer and spiritual growth. The ministry profile of the church has also expanded into an enterprise that serves the community.

As the Wheeler Congregation prepares for the years ahead, the plans for building for the future are paramount, with God’s directive to move from consecration to commitment to construction, and, ultimately, to celebration.  All the hope of the Congregation is in the faithfulness of the God Who superintended the blessed beginning, Who ordained the Lawson Legacy, Who consecrated the Cosby Commission and Who is preparing a faithful future for His people assembled as the Body of Christ, those who worship, witness and work in behalf of the Kingdom of God through the assembly of believers known as the Wheeler Avenue Baptist Church.